Movies at the Tennessee

Moviegoers will travel back in time and see these classics, as they should be: in a historic theater originally built as a movie palace surrounded by other movie-lovers, enjoying some popcorn and a cold drink. Come experience some of your favorite classics on the big screen! Prior to each screening, hear the Mighty Wurlitzer organ fill the auditorium with magnificent music. 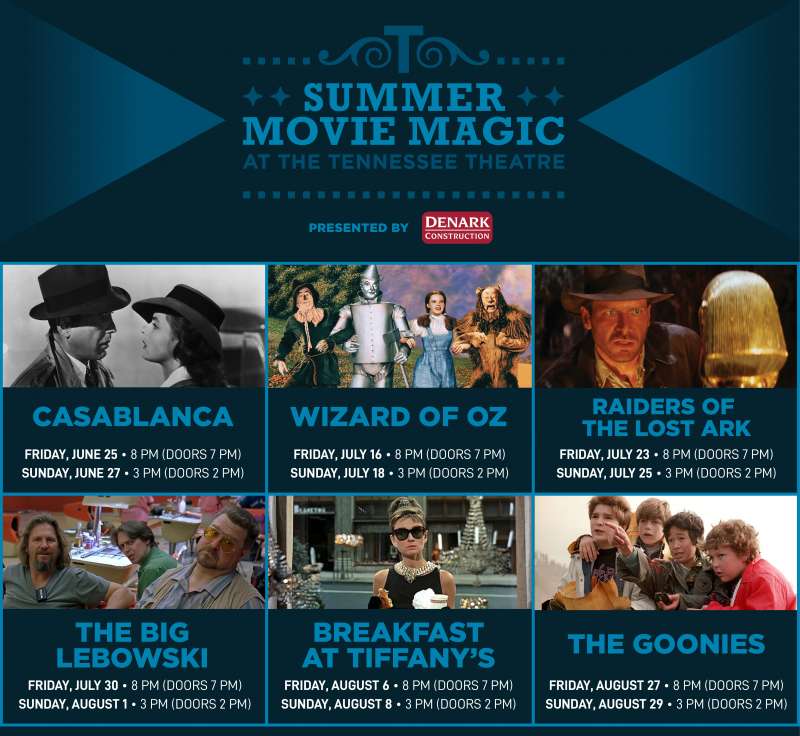 Rick Blaine (Humphrey Bogart), who owns a nightclub in Casablanca, discovers his old flame Ilsa (Ingrid Bergman) is in town with her husband, Victor Laszlo (Paul Henreid). Laszlo is a famed rebel, and with Germans on his tail, Ilsa knows Rick can help them get out of the country. (Rotten Tomatoes)  This film is 1 hr 42 mins and is rated PG.

When a tornado rips through Kansas, Dorothy (Judy Garland) and her dog, Toto, are whisked away in their house to the magical land of Oz. They follow the Yellow Brick Road toward the Emerald City to meet the Wizard, and en route they meet a Scarecrow (Ray Bolger) that needs a brain, a Tin Man (Jack Haley) missing a heart, and a Cowardly Lion (Bert Lahr) who wants courage. The wizard asks the group to bring him the broom of the Wicked Witch of the West (Margaret Hamilton) to earn his help. (Rotten Tomatoes) This film is 1 hour 52 mins and is rated PG.

Raiders of the Lost Arc

Dr. Indiana Jones, a renowned archeologist and expert in the occult, is hired by the U.S. Government to find the ark of the covenant, which is believed to still hold the Ten Commandments. Unfortunately, Hitler's agents are also after the ark. Indy and his ex-flame Marion escape from various close scrapes in a quest that takes them from Nepal to Cairo. (Rotten Tomatoes) This film is 1 hour and 55 mins and is rated PG.

Jeff Bridges plays Jeff Lebowski who insists on being called "the Dude," a laid-back, easygoing burnout who happens to have the same name as a millionaire whose wife owes a lot of dangerous people a whole bunch of money -- resulting in the Dude having his rug soiled, sending him spiraling into the Los Angeles underworld. (Rotten Tomatoes) This film is 1 hour 57 mins and is rated R (Drug Content|Brief Violence|Pervasive Strong Language|Sexuality).

Based on Truman Capote's novel, this is the story of a young woman in New York City who meets a young man when he moves into her apartment building. He is with an older woman who is very wealthy, but he wants to be a writer. She is working as an expensive escort and searching for a rich, older man to marry. (Rotten Tomatoes) This film is 1 hour 55 mins and is rated G.

When two brothers find out they might lose their house they are desperate to find a way to keep their home. They find a treasure map and bring some friends along to find it. They are all out looking for the "X" and trying to get away from a group of bad guys who also want the treasure. This film is 1 hour 51 mins and is rated PG. 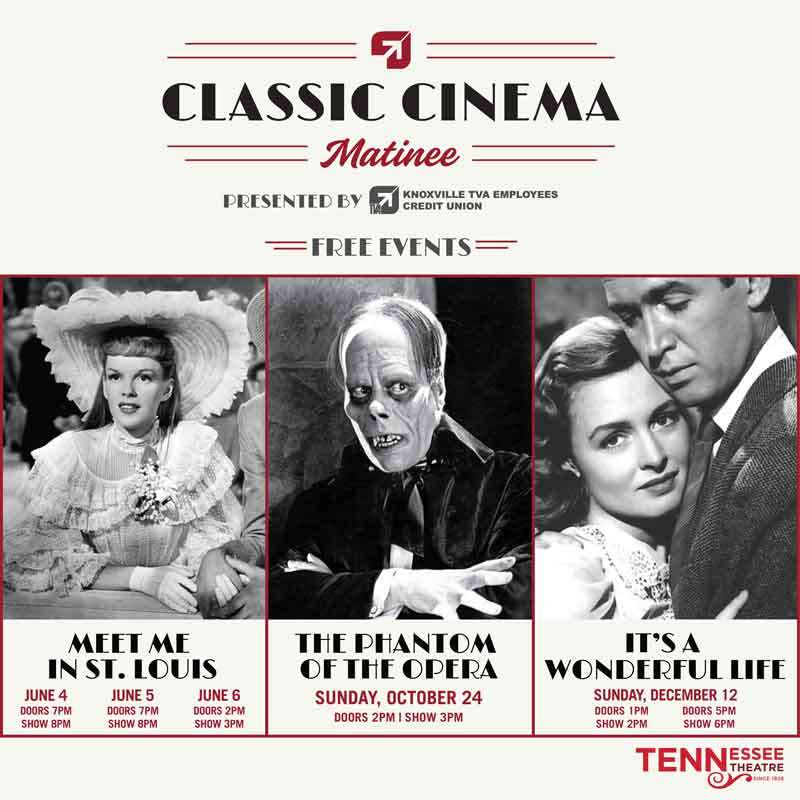 Meet Me in St. Louis

“Meet Me in St. Louis” is a classic MCM comedy featuring Judy Garland.  A disarmingly sweet musical led by outstanding performances from Judy as well as Margaret O'Brien, Meet Me in St. Louis is a treat for all ages. Some of the most popular songs from the film include “The Boy Next Door”, “The Trolley Song”, and “Have Yourself a Merry Little Christmas”. Run time is 1 hour 53 minutes and is rated G.

The Phantom of the Opera

In this black and white silent horror classic from 1925, a horribly disfigured recluse takes opera singer Christine, the object of his affection, prisoner. Accompanied by an original score on the Mighty Wurlitzer organ, this eerie delight is sure to kick off the Halloween season in the perfect setting – a historic movie palace! Run time is 1 hour 19 minutes and is not rated as it precedes the MPAA film rating system.

Released in 1946 and starring Jimmy Stewart and Donna Reed, “It’s a Wonderful Life” is a bittersweet comedy/drama about George Bailey, a compassionate but debt-ridden manager of a bank in typical small-town America, and the angel that helps him realize his importance in the world. Run time is 2 hours and 15 minutes and is rated PG.

General admission seating is available on a first come, first served basis and is limited. Doors will open one hour prior to the showing. For information on parking (city owned garages are free on weekends), visit parkdowntownknoxville.com. Please check our COVID policies before attending to ensure you are prepared to comply with safety requirements.