I like to think of my marriage as a spontaneously well planned event, an oxymoron from start to finish.  When I think back to January 2, 2005 or was it January 3, 2005 (there’s still some discrepancy about the actual date since the actual date of the wedding was the 3rd but somehow the signed document says the 2nd), it all came together magically as if my fairy godmother had waved her wand and made it all so.   And of course, it would be magical because it happened on the stage of the Tennessee Theatre.

We didn’t decide until the afternoon of January 3rd that we were definitely going to do it that day.  Our license had been procured on December 2nd and was almost out of time.  But Tom’s best man was vacationing in Florida and we had to await his return.

I had served on the Tennessee Theatre Foundation’s board since nearly the inception of the foundation, and before that I was the CPA for the company that owned the theatre and for its founder, James A. Dick.  And, since Tom was producing the stage show for the theatre’s grand opening which was less than two weeks away, it seemed like the obvious place for our wedding.  There was only one problem.  The Tennessee Theatre was still under construction.  It wasn’t open for business.

As it happened, I had a good friend who was supervising the restoration.  When I contacted him, he made me swear to keep it a secret, instructed us that the entire wedding party would be required to wear construction hardhats, and told us to meet him with everyone who would be a part of the ceremony at the side entrance promptly at 6:30.  We had secured a public official to perform the ceremony.  We knew the best man was on his way.  It was all coming together, but I needed some bridesmaids.

At 3:30 I called my circle of friends, Mary Fran, Amy, and Vanessa and told them what was happening.  The ever thoughtful Amy managed to pull together a rush order of bouquets for each of us, and Mary Fran bought bubbles to blow instead of throwing rice.  But there were still a few missing pieces.  Even though we couldn’t bring the Mighty Wurlitzer up to the stage to play the wedding march, we needed Bill and Margie Snyder to be there.  It just wouldn’t have been a proper event at the theatre without Bill, the heart and soul of the theatre.  And at a moment’s notice, they agreed to be there.

Now, what to wear?  I had ordered an off white outfit for a Christmas event that I couldn’t attend because I hadn’t felt well that day.  That would do.  Slap the hair in a bun, a touch of mascara and lipstick and let the show begin.

One last minute detail—a reception.  I called Martha Boggs at the Bistro by the Bijou to see if she would stay open for a couple of hours and she readily obliged.  I gave her an order for several appetizers and had her chill a few bottles of champagne.   We called a few other close friends and told them to meet us at the Bistro at 7:30.

Our little wedding party reached the theatre at the appointed time and my anonymous friend handed each of us a hardhat.  What a sight that must have been as our party of eleven slipped up the back steps and onto the stage of the theatre, some of us carrying bouquets, some  carrying rings, but all in hardhats.  As I looked around, I knew I’d never see this place that I had loved for so many years quite the same again.  The proscenium sparkled.  The orchestral shell, which had just been put in place, smelled freshly painted and new.  And our music was underway as construction workers fired nail guns and electric screwdrivers whirred throughout the auditorium, bolting seats in place.

As we recited our vows, we knew that because of the serendipitous forces that came together to make that moment real, there was a pretty good chance those vows would stick.  Over the years there have been many weddings on the stage of the Tennessee Theatre, but I doubt that many have been quite as impromptu or perhaps even as magical as mine.  If the theatre has ghosts, and I believe she may have several, those spirits may still be talking about the odd little party that arrived in hardhats and left amid a burst of bubbles. 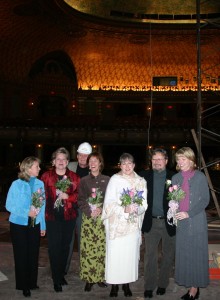