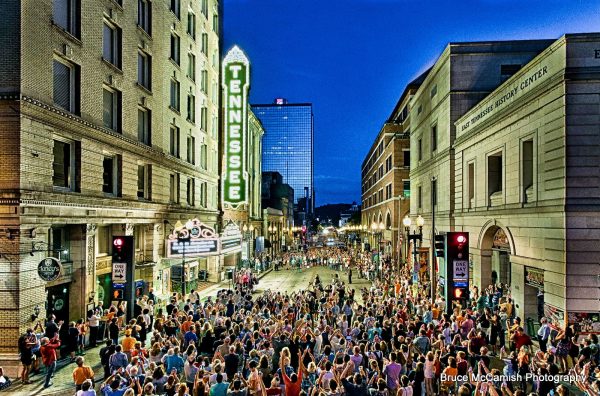 Another year is winding down, and I want to take a moment to reflect on the Tennessee Theatre’s notable moments of 2016. I hope that you were able to experience some of these and create your own cherished memories.

The Tennessee Theatre once again was named one of the region’s favorite places for music and entertainment by the Knoxville News Sentinel, the Knoxville Mercury, CityView Magazine, and TripAdvisor. Concert highlights from the most successful year in recent history include The Beach Boys, Sturgill Simpson, Harry Connick Jr., Leon Bridges, Bonnie Raitt, Bob Dylan, and Kelsea Ballerini. Broadway at the Tennessee featured the award-winning, unforgettable blockbuster, The Book of Mormon, which broke all previous sales records for a touring Broadway show at the Tennessee. The Knoxville Symphony Orchestra welcomed a new music director, and the Knoxville Opera presented Hansel and Gretel for the first time at the Tennessee since 1984. Classic films old (Casablanca) and not-so-old (The Goonies) graced the 53-feet-wide screen, as the legacy of the movie palace was honored in the summer movie series.

After eleven years and thousands of hours shining over Gay Street, the beloved marquee and vertical sign were due for a refurbishment. A pair of towering cranes and some determined workers removed the sign from its perch on June 6 to complete the repair off site. In late August the sign was returned, and on August 31 the marquee and sign with 5700 new LED bulbs were re-energized, flooding the streets with light. Donations covered 90% of the cost, making it possible for the project to be done right.

While celebrating the marquee and on multiple other occasions, the Tennessee Theatre opened its doors to the community free of charge. It’s part of our mission to operate the Official State Theatre of Tennessee for the benefit and enjoyment of all, and free backstage tours and special events such as the East Tennessee PBS Downton Abbey premiere screenings, the East Tennessee History Day film presentation, and October’s Cartoons & Costumes welcomed thousands of visitors to the Tennessee. We worked to develop tomorrow’s audiences at our Kids’ Movie Day and by providing hundreds of free tickets to Broadway shows for area school children. The James A. Dick Mighty Musical Monday Wurlitzer concert series marked its 15th anniversary with a special matinee event, one that also paid tribute to Dr. Bill Snyder, the Tennessee’s volunteer house organist since 1979.

One of the most rewarding things about working at the Tennessee is hearing the personal stories and lasting impressions from the people who walk through our doors: they recall parents and grandparents who used to bring them here, and they share how happy they are to now bring their own children and grandchildren. Kids envision the grand lobby as part of an opulent mansion, or a luxury ocean liner, or a wizard’s boarding school. The auditorium is compared to a genie’s bottle or a Fabergé egg. Whether they have attended events for decades or if they’ve just moved to the area, everyone claims the Tennessee Theatre as their own.

We couldn’t do this important work without our patrons, donors, and partners who attend shows and events and make gifts to support our mission as a non-profit organization. Your support helps us continue to share this magnificent place with everyone and make it theirs and we thank you. We look forward to making more memories with you in 2017. 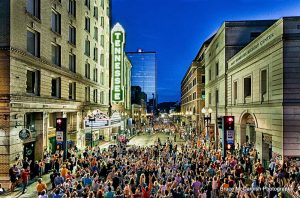 Hundreds gather on Gay Street for the relighting of the marquee and vertical sign on August 31, 2016. (Photo by Bruce McCamish Photography)