As the Tennessee’s Summer Movie Magic series quickly approaches, we looked back on our history as a bustling movie palace. Initially, the Tennessee’s purpose was to display movies, and due to prohibition laws, many saloons closed and were turned into movie theaters. Much of these theaters couldn’t see past three to four years of success, but the existence of the Tennessee Theatre proved to be wildly successful among all the new theaters in Knoxville, including the six others hosted on Gay Street alone.

In its first few years, the Tennessee’s feature films were searing dramas about adultery, prostitution, alcoholism, blackmail, and murder. The Tennessee played more than 100 feature films a year, almost all of them less than six weeks old. Hollywood’s output was such that management was rarely tempted to hold a movie over or replay one, regardless of its popularity. Customers might have only one chance to see any given movie, and it was during the three-night window when it was at the Tennessee. That’s why the theater needed almost 2,000 seats. 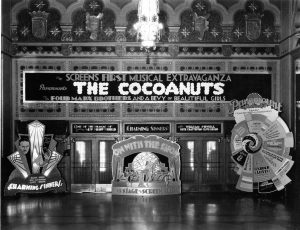 Joe Parrott’s astonishing lobby display for the Marx Brothers’ very first movie, The Cocoanuts, which debuted at the Tennessee on August 2, 1929, one day before its official national release date. Parrott was the house artist who created such displays for upcoming films being shown at the Tennessee.

One of the first Disney films ever shown at the Tennessee was the 1929 Mickey Mouse cartoon, Opry House, but it had nothing to do with Nashville’s Ryman Auditorium or country music. Walt Disney was only 27 when his early films were delighting crowds at the Tennessee Theatre. In its first year, the Tennessee had shown a wide variety of movies, silent movies, sound movies, color movies, animated movies, all-black-cast movies, movies directed by women, but it had never shown a movie that was more than six weeks old.

Fast forward through a successful decade or so, Tennessee Johnson, the first heroic movie about Andrew Johnson, got a special early showing at a theater that shared part of the movie’s title. On February 17, 1943, the Tennessee hosted the “southeastern premiere” of MGM’s newest historical film. Tennessee Johnson had premiered at New York’s Astor weeks earlier, but it had been shown nowhere else until it opened at the Tennessee and in three other cities, Houston, Philadelphia, and Lincoln’s hometown of Springfield, Illinois.

The Tennessee was in its prime of the movie era, but with the introduction of more modern and effective movie theaters in the Knoxville area over the years, it saw a decline in business and popularity. In October 1977, theater management announced its closing. The last film shown before the Tennessee went dark was A Piece of the Action starring Bill Cosby, Sidney Poitier, and James Earl Jones.

Classic films were screened between the time Dick Broadcasting owned the building and the Historic Tennessee Theatre Foundation, a nonprofit organization, was formed to own and manage the theatre, between 1982 and 1996. The Tennessee started the Summer Movie Magic series during the summer of ’96, and since then, it has consistently shown a number of classic films each summer. Summer Movie Magic pays homage to our history as a movie palace and also allows the community an opportunity to experience the Tennessee Theatre at an affordable ticket price.

We will kick off the 2017 Summer Movie Magic series with the showing of E.T. The Extra Terrestrial, a viewer’s choice film, on June 23rd and 25th.  Join us to experience film on the big screen, just as it was in the days of Hollywood’s heyday!

And if you’d like to learn more about our history, check out our historical timeline or our book, written by Jack Neely!