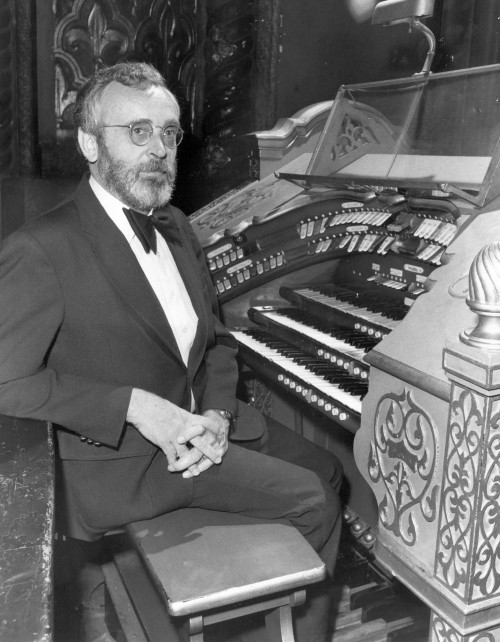 On this day in 2001 (the 73rd birthday of the theater), the first performance on the restored Mighty Wurtlitzer Organ kicked off a public campaign to restore the theater. Audiences have loved the organ for decades and we are lucky to have the beloved Dr. Bill Snyder, our house organist since 1979. In honor of this milestone, Dr. Snyder recalls his memories of the organ.

My earliest memories of the Tennessee Theatre’s Mighty Wurlitzer organ were hearing the radio broadcasts by the well-known Tennessee Theatre organist of the 1940s, Billy Barnes. I was a teenager during that time period and the transmission from the Tennessee Theatre to the radio station was done by telephone. The Billy Barnes radio casts stimulated my interest in the pipe organ.  I had several years of piano lessons beginning in the third grade, and I started taking organ lessons on a real church organ my senior year in high school,1949. I have played several church organ gigs over the years and am currently the organist at Washington Presbyterian Church.

In 1979, it was announced that the Tennessee Theatre, after being closed for a year, would reopen and show classic movies. I met with a representative of the group planning to reopen the theatre and volunteered to play the organ before the showing of movies. The first time I played the organ publicly was on October 18, 1979, before the showing of the classic “San Francisco” starring Clark Gable and Jeanette MacDonald. After the movie, an elderly lady spoke to me with tears in her eyes. She said that the evening was so special to her because her late husband proposed marriage to her in the balcony of the Tennessee Theatre when they saw the film years prior. That conversation impressed me with the importance of the Tennessee Theatre and the Wurlitzer organ to the citizens of Knoxville.

Prior to playing for that screening of “San Fransisco”, Technical Director Tim Burns asked me if I would play the Tennessee Waltz as the outro music as the organ is lowered below audience level. The audience was thunderous in approval, and so it became a tradition.

One unforgettable memory was when a group of high school students were performing a dance number on stage. I was sitting on the organ bench prepared to bring up the organ when the students finished their dance number. One of the female dancers got too close to the edge of the stage and fell off the stage, landing on me. Thankfully I provided a soft landing for her, so she was uninjured!

My most exciting involvement with the Mighty Wurlitzer is the evolution of what is today known as the James A. Dick Mighty Musical Monday Program. After the organ was completely rebuilt in 2001 and had its first concert in October after returning to the theatre, Executive Director Becky Hancock proposed that we offer a free, noon time organ concert once a month to showcase the beautifully restored organ. We launched the program in December 2001. It has grown in attendance from 200-250 persons in 2001 to more than 1,000 today. It is a great way to experience the Mighty Wurlitzer and I hope you can join us for a Mighty Musical Monday.