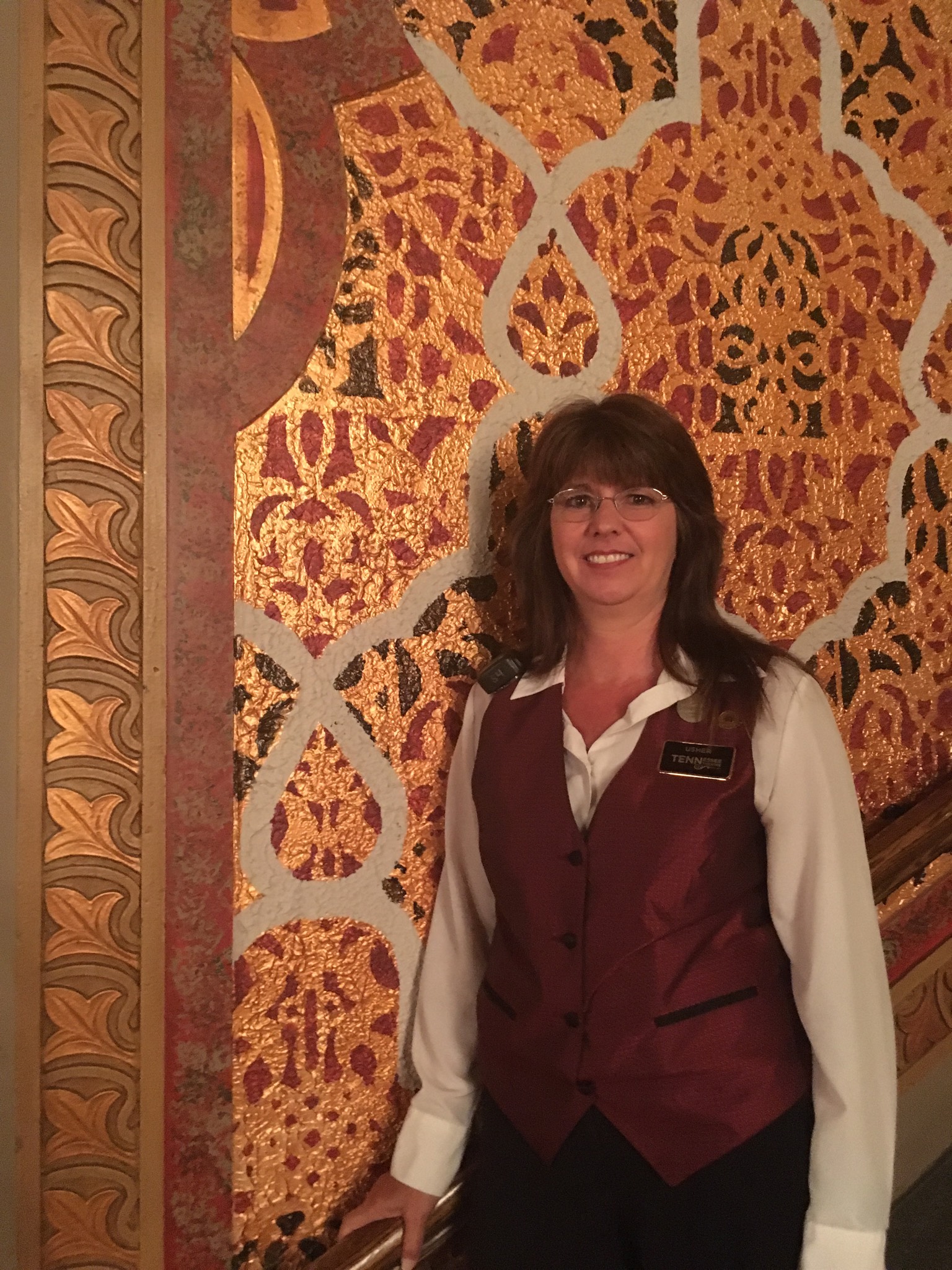 An usher at the Tennessee Theatre for 37 years, Marie Russell shares her history with the Theatre.

Marie Russell was 17 years old when she was first hired as an usher at the Tennessee Theatre. Her mother and three of her aunts were already ushers at the Theatre, so it made sense for Marie to join her family when it came time to get a job. “There were only 15 ushers at the Tennessee when I started working,” recalls Marie, “and we all worked all of the shows. Now there are 45 ushers and there is a rotating schedule.” Marie describes it as the perfect job for a stay-at-home mother who wants an opportunity to get out of the house and work just a little bit, which was the case for her mother and her aunts, and later on for Marie herself when she got married and started a family. Marie remembers her mother put the additional income toward their family vacations.

Marie started working at the Theatre in 1982, the same year the World’s Fair was held in Knoxville. Russell has always been fond of plays and musicals, and remembers clearly when Drumwright, a musical starring and produced by actor and Knoxville native John Cullum, was featured at the Tennessee Theatre from June through August 1982. “I often would stay after my shift was over and watch the end of the performance,” says Marie. Marie still enjoys the touring musical productions at the Tennessee the most. “A recent musical I really enjoyed was KINKY BOOTS,” says Marie, “I wasn’t familiar with it before, and thought it was hilarious.”

In her early years at the Theatre, the women’s usher uniform was a white blouse, black skirt (with hose and heels), and the women typically wore a black shoe-string ribbon tied at the neck, which was fashionable at the time. Marie recalls, “When I was pregnant with my first child, my mother who was a seamstress made me a special usher uniform that would fit over my belly. It was a maternity dress with a white bodice and a black bottom, created as one continuous piece but made to look like a blouse and skirt!”

Marie has had many interesting jobs over the years. In addition to working as an usher at the Tennessee Theatre, in her early adult years Marie worked full time jobs – first as a file clerk, then a billing clerk at UT hospital, and then a receptionist at a pediatrician’s office. After the birth of her first of two children, Marie completed a 1-year surgical tech program, and took a part-time job working for a plastic surgeon. While her children were young she worked seasonally for the UT Bursar’s Office, and for the past eleven years Marie has worked part time for Knox County Schools. “But,” says Marie, “through all of those jobs, and two children, I have never taken a break from the Tennessee Theatre. Being an usher at the Tennessee Theatre has been a constant throughout my life.”

Marie recalls some of the differences in the Tennessee Theatre before and after its renovation (2003-2005). “The layout of the seating changed inside the auditorium. Before the renovation, the aisles were straight so each section of seats on the Orchestra level contained fourteen seats in each row. After the renovation, the aisles were curved, so the number of seats in each row vary now. After the reopening, all of us ushers had to memorize the new seating layout.” Another difference was that the panels in the doors leading to the auditorium used to be clear glass, allowing glimpses of the production if you were working in the lobby. During the renovation they were replaced with mirrored panels, true to the original design of the Theatre. With a few exceptions, Theatre guests have always been allowed to bring items from the concession stand inside the Theatre, but after the renovation, “people were incredulous that they could bring drinks and snacks into the auditorium after so much effort had been made to restore the Theatre to its original beauty!” recalls Marie.

Marie has recently been promoted to head usher, a responsibility which involves standing ahead of the other ushers and directing guests to the appropriate aisle, answering questions the guests might have about where the restrooms or the elevator are located, and staying on shift until the end of the show. “I really enjoy helping people, so I love the new position.” Marie laughs, “It only took 37 years to get a promotion!”

Over and over, Marie expresses how much she loves the Tennessee Theatre – it has been such a huge part of her life. “My son wants me to move to Florida where he lives, but I don’t think I could leave my job at the Theatre or my job at Knox County Schools – I’d miss them too much.” The Theatre would miss Marie, too.