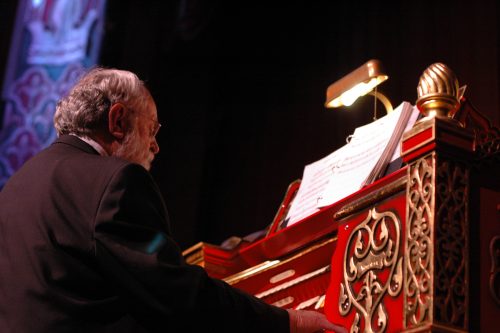 There are a lot of things people love about the Tennessee Theatre, but no single thing has a more devoted fan base than our beautiful Mighty Wurlitzer Organ. The Wurlitzer is original to the Tennessee – when the doors first opened on October 1, 1928, this very instrument was in place and ready to entertain patrons.  Before the Theatre’s comprehensive renovation and restoration project was begun in mid-2003, the Wurlitzer and all of its components were removed and shipped to Reno, Nevada, where it was fully restored. It was welcomed back on the Theatre’s 73rd birthday, October 1, 2001, to an adoring crowd.

The technicians who restored the organ advised us to play it often – after all, why would you invest so much in a fine instrument and then let it sit unused and gather dust?  Bill Snyder, the house organist at the Tennessee since 1979, came up with the idea of presenting a free, monthly concert that would make sure the organ was played regularly, and it would offer an opportunity for the community to enjoy the Tennessee Theatre free of charge. Thus, the “First Monday” organ concert series was begun on December 3, 2001.

The concerts were simple at first: a few tunes played and a few words spoken from the organ bench. Crowds rarely topped 200.  After a while, the program was re-branded the “James A. Dick Mighty Musical Monday,” after the man responsible for saving the Tennessee Theatre from the wrecking ball in 1980. Also, guest artists were added to the bill, local musicians and groups that would rarely have the chance to perform on the Tennessee’s stage. Mighty Musical Monday (MMM) has hosted middle and high school choirs, jazz bands, vocalists of all styles, classical ensembles, a Klezmer band – even a belly dance troupe. Attendance grew steadily, and today MMM regularly welcomes 700, 800, or even 1000 people each month for the noonday concert.

On Sunday, October 30, we celebrated the fifteenth anniversary of this popular program and the treasured instrument that is its centerpiece. Joining Bill and organists Freddie Brabson and Paul Swiderksi were some of MMM’s favorite performers over the years:  vocalists Liz Peterson and Natalee Beeler Elkins, and ensembles Kukuly and the Gypsy Fuego and Kelle Jolly and Will Boyd. They put on a tremendous, two-hour show.

The concert concluded with a surprise tribute to Bill, who has volunteered at the Tennessee Theatre for 37 years and who dreamed up one of the most popular and beloved theatre organ concert series anywhere in the country. A 5-minute video about Bill’s passion for the Wurlitzer was screened, and Bill received an official proclamation from the State of Tennessee naming 10/30/16 as “Dr. William T. Snyder Day.” Cartoonist Charlie Daniel created a personalized drawing for Bill, which was presented to him on stage. Bill was completely surprised and extremely grateful for the appreciation bestowed on him that day.

Compared to the heyday of the movie palace in the late 1920s, there aren’t very many theatres still standing, and even fewer – only about 40 – still have their original Wurlitzer organ for everyone to enjoy. If you’ve not heard the Wurlitzer recently, please come visit us soon! 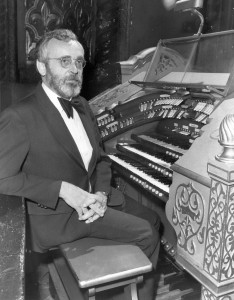 Dr. Bill Snyder at the Mighty Wurlitzer in 1980