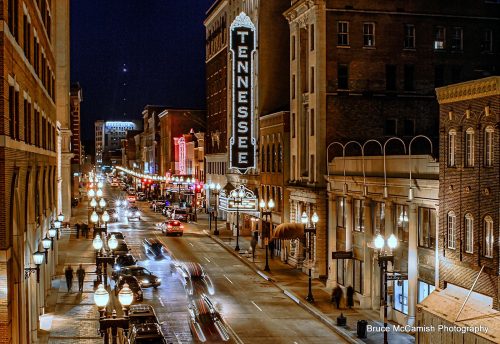 Who doesn’t love the Tennessee Theatre marquee and vertical sign? They are two of the most recognized and photographed objects in Knoxville, and they proudly represent the beautiful historic theatre inside the doors below. In addition to announcing upcoming events and welcoming patrons to the theatre, the marquee and sign serve as a backdrop for engagement and wedding photos or impromptu selfies. They’re featured in television commercials, magazine ads, and music videos.  They’ve even made their own appearance in a hit movie – slightly altered to read “ENNESSE,” in 1999 our marquee posed as a theatre sign in downtown Indianapolis for the film October Sky, starring Jake Gyllenhaal (see photo below).  It’s hard to imagine Gay Street and downtown without the brightly flashing lights of the Tennessee marquee.

The appearance of the Tennessee’s marquee and vertical sign has actually changed several times since the theatre opened in 1928.  In 1956, the marquee was modernized and featured mostly neon and fluorescent lighting, and the original vertical sign was removed and scrapped.  The vertical sign did not reappear to tower over Gay Street until the current replica of the original marquee and sign was installed during the comprehensive renovation of the Tennessee Theatre in 2005.

Today, the marquee and vertical sign are showing significant signs of wear and tear. The light bulbs are fading, and several hail storms caused damage to countless sockets and broke many bulbs. Electrical systems are outdated, and chasers are malfunctioning. There’s been some minor damage to the front of the marquee from large trucks hitting the edge.  It is time for some TLC on the Tennessee’s beloved sign and marquee.

This summer, Pattison Sign Group, which manufactured and installed the marquee and sign in 2005, will perform some major repair and refurbishment. All 5,700 light bulbs will be replaced with new-generation, energy-efficient LED bulbs, and sockets will be cleaned and repaired.  Electrical components will be updated, including new message boards and chasers. Damage to the structure will be repaired, and the entire marquee and sign will get a fresh coat of paint. It’s no small task—we estimate the work to take at least six weeks, and the vertical sign will be removed from its position high above Gay Street so that the repair can be completed off site. All told, the Tennessee Theatre will invest more than $150,000 in the refurbishment of the marquee and vertical sign, but it will look better and shine brighter than ever.

We need your help to complete this project!  The Tennessee Theatre is a nonprofit organization, and we’re inviting the public to make donations to offset the costs of the refurbishment.  You can “sponsor” one or more LED light bulbs (and related improvements) for $25 each, or you can sponsor an entire letter on the vertical sign for $1000. All bulb and letter sponsors will be listed on our web site. Click here to make a donation.

Work on the marquee and vertical sign will begin in June, and we’ll announce a re-lighting ceremony when the work is complete. Sign up for our newsletter and follow us on Facebook or Twitter to get updates on the project and learn about upcoming events. Thanks for your support! 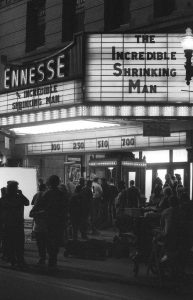 The movie based on Homer Hickam’s novel Rocket Boys was set in the mountains of West Virginia. Much of the movie was filmed in East Tennessee, and a segment portraying downtown Indianapolis was shot along Gay Street. In the story, Homer goes to the movies. The end “T” and “E” were removed from the Tennessee’s marquee to conceal its actual location.