Deprecated: mysql_connect(): The mysql extension is deprecated and will be removed in the future: use mysqli or PDO instead in /home/ttheat15/public_html/discover/blog/wp-includes/wp-db.php on line 1562
 Tennessee Theatre » A Tennessee Theatre Love Story
Tickets Broadway Visit Support Education and Outreach Gift Shop Discover Reserve Menu 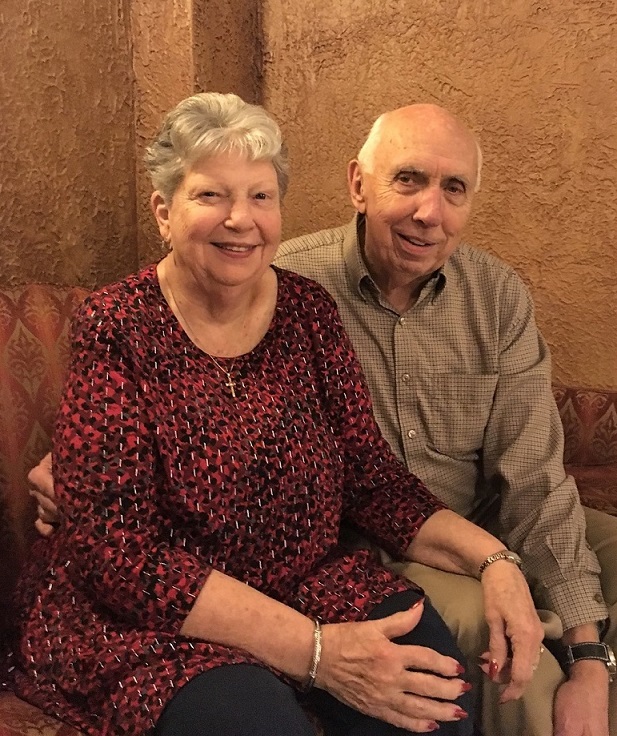 Jack and Linda Simpson were married on March 23, 2017, one year after their first date – they had attended a Mighty Musical Monday Performance together at the Tennessee Theatre the previous March. Each their second marriage, Jack and Linda were not exactly strangers when they walked into the Theatre that fateful March day.

Jack and Linda’s first husband, Gene, had been high school and college friends. Both attended what was then Knox High and South High, and later carpooled to UT’s campus during their early college years. “We had this friend, Buzzy, who was the one with a car. He picked up me and my brother, Ted, as well as Gene and his brother Joe, and the five of us rode to UT together frequently,” said Jack. It wasn’t until the late 1990’s that Jack and Linda met. Jack and his first wife, Loutrella, began to meet up with Linda and Gene before Lady Vols games, sharing a meal and conversation in the arena dining room. Jack talked mostly with Gene, and Linda with Loutrella, so they hardly knew each other from these meetings. A decade later, both Linda and Jack suffered the loss of their spouses – Gene passed away in 2009 and Loutrella, in 2014.

Proudly self-proclaiming herself the “card-lady,” Linda enjoys sending Christmas letters, and Jack (and Loutrella before her passing) had remained on her Christmas list long after they stopped sharing meals at the Lady Vols games. It was this Christmas greeting that caught Jack’s attention. Jack says he invited Linda to Mighty Musical Monday because he knew Linda was the music librarian at her church and thought she’d enjoy it. She did. Afterward they had lunch at Calhoun’s and took a walk along the river. They went on a second date in April and things took off from there.

Their wedding was performed at Linda’s church, the First Baptist Church of Tellico Village. It was intimate – just family and close friends. When they went to obtain the marriage certificate at the Loudon courthouse, they learned they were ineligible for the discount because they hadn’t received premarital counseling. Jack laughs, “We collectively have over a century of marriage experience, my first marriage to Loutrella lasted 55 years, and Linda and Gene were married 47 years, but that didn’t count for anything! We had to pay the maximum fee of $100 for our marriage certificate.”

Jack and Linda both remember the Tennessee Theatre before its restoration. Linda, whose father’s job moved their family frequently, travelled with her Chattanooga Central High School choir to Knoxville in the 10th grade to compete in a state choral competition. During the trip, they came as a group to the Theatre to see a movie. “I don’t remember what movie it was, but I’ll never forget my first impression of the building and being inside the Theatre’s beautiful lobby.” Having grown up in South Knoxville, Jack remembers seeing a lot of movies and news reels at the Tennessee in his early teens. “The opulence of the building was powerful,” says Jack, “Plus, there was no television in Knoxville until 1953 so it was a way to see news and entertainment, as well as beat the heat!” The Tennessee Theatre was one of the few establishments in Knoxville that had air conditioning at that time.

The Tennessee Theatre is still a big part of Jack and Linda’s life, and attending the Mighty Musical Monday performances is one of the many things they enjoy together. They also love the Broadway performances that come to the Tennessee – they saw Mamma Mia! and Dirty Dancing, and are looking forward to attending Kinky Boots this December. They also attend the Summer Sunset Music Series concerts at the Great Smoky Mountains Heritage Center, and go see a lot of movies. They agreed that the thing they enjoy the most is talking and getting to know each other more.

When you spend time with Jack and Linda, it is hard not to share in their good humor and infectious laughter. Characteristic of most newlyweds, they are very affectionate with each other and steal private, knowing glances. Their lives thus far have been rich in many ways, and they feel fortunate to have begun this new chapter together. It’s a privilege of the Tennessee Theatre to play a role in their courtship and union. Since that very first date, the Theatre is a place where Jack and Linda make lasting memories.

Our hope is that Tennessee Theatre continues to be a culturally-rich, awe-inspiring, welcoming place in the community where memories continue being made for generations to come.