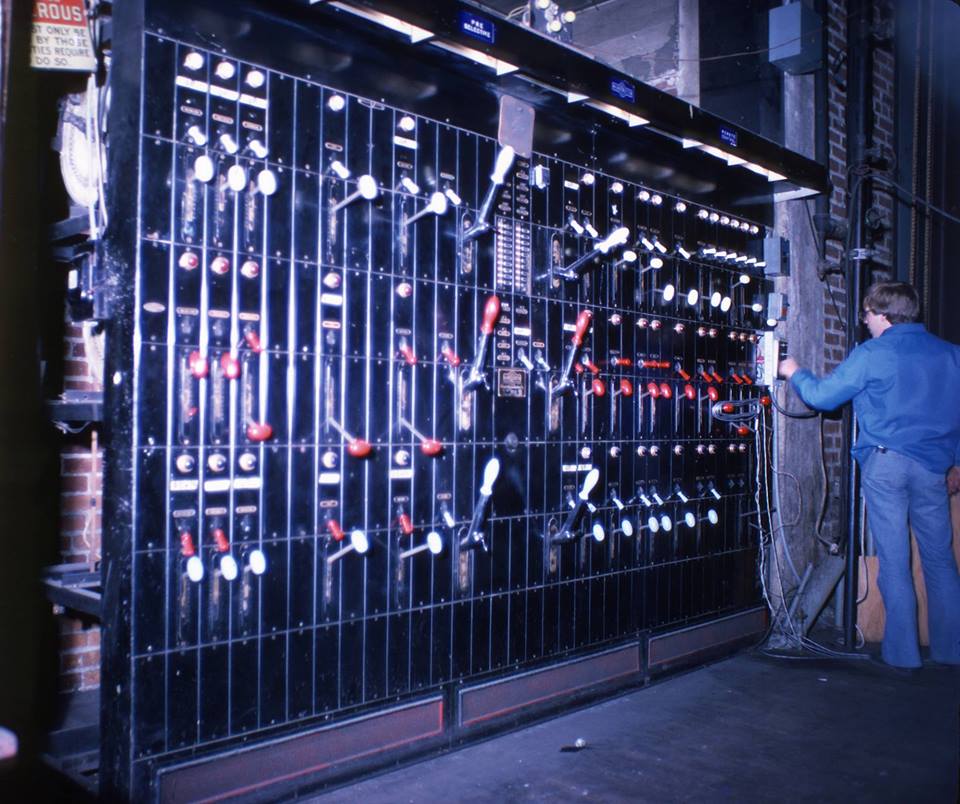 Tim Burns, our technical director, began his career at the Tennessee Theatre in October 1979. For over 35 years, he has brought his passion and expertise to our stage. As we announced our Summer Movie Magic series, we sat down with Tim to learn more about his history with the theater and the experience of seeing movies in our movie palace.

TT: Tell us about your father, who was a projectionist in several theaters in town including the Tennessee Theatre.

TB: My dad, Bill Burns, started as a projectionist in 1930 at the ripe old age of eleven at the Lyric Theatre in Ashland KY. He and my mother moved to Knoxville from Charleston WV in 1949, (that in itself is another story). He first worked at the Lee and Dawn theatres in Knoxville. In 1951, he landed a permanent spot at the Pike theatre, and was there for 33 years. The Pike later became the Capri Cinema. He also worked relief shifts at the Riviera, Knoxville and Twin-Aire Drive-Ins and worked in some capacity at most of the other theatres in town. After he retired in 1984, he came to the Tennessee and ran all the movies through 2001.

TT: What are your first memories of the Tennessee Theatre?

TB: I remember standing at the box office and not being able to see over the counter, walking up the grand lobby and being at eye level with the brass rails, and sitting in the seats and looking up at the blue dome that seemed to be a million miles up there. I remember my dad bringing me to see “Sleeping Beauty”. He took me up to the balcony which was closed to the public. I had the whole balcony to myself, which made me feel very special.

TT: What was the first movie you ever saw here?

TB: The first movie that I remember seeing at the Tennessee was “Flipper” which was released in 1964.

TT: What’s different about the projection process from the time your father worked in the booth to the movies we show today?

TB: When my dad started in 1930, he was running carbon-arc projectors and 10 minute reels. The film was nitrate, so the possibility of a flash fire in the booth was a concern. With the advent of safety film in the 40’s, fire was no longer an issue. Also, with 20 minute reels, the numbers of changeovers were cut in half. In the 70’s, carbon-arc was replaced with Xenon bulbs, and the entire movie was built up on large platters that fed film through a single projector. So changeovers became a thing of the past and one projectionist could operate several screens.

TT: Tell us about the digital projector. How has it impacted movies at the Tennessee?

TB: The digital projector that Regal Entertainment Group donated to the Tennessee in 2014 enables us to present movies with the latest technology providing enhanced picture and sound quality. Also, the availability of movie prints on film is becoming harder to book. The studios are not making any new prints, so when the existing prints wear out, that will be the end of film presentation. We will still maintain our 35mm film projectors so we will always have the capability of showing archival films.

TT: Is there any particular movie showing at the Tennessee that stands out to you?

TB: The first movie that I worked here at the Tennessee on October 18, 1979, was the 1939 classic “San Francisco”. That was not only the beginning of my career here at the Tennessee, but also the beginning of my love for the great Hollywood classics. Another highlight was when we ran “Casablanca” for five consecutive sell outs. Or anytime we ran “Gone with the Wind”, which is my favorite movie of all time. But really, I enjoy it when we run movies; it’s going back to what the theatre was the first fifty years of its life, a movie palace.

TT: Which movie are you most excited about this summer?

TB: That’s an easy one, “Gone with the Wind”. I’m also looking forward to “Mary Poppins”, since I love musicals. I really feel good about this summer’s line-up; we definitely have something for everybody.

We hope to see you this summer at our Summer Movie Magic series!