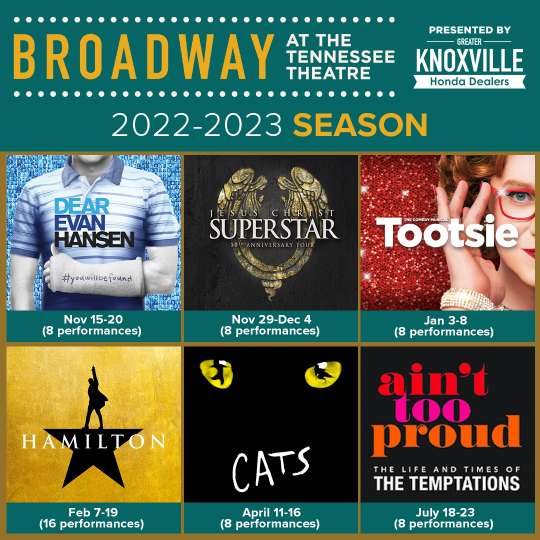 Since 2008, the Tennessee Theatre has presented classic favorites and recent hits in its Broadway at the Tennessee series, entertaining more than a quarter-million enthusiastic Broadway patrons. The 2022-2023 season of Broadway, featuring six weeklong shows and a total of 56 performances from November 2022 to July 2023, includes something for everyone.  Broadway at the Tennessee is presented by Greater Knoxville Honda Dealers, with additional support from Visit Knoxville, Stowers Machinery Corporation, and Rather & Kittrell Capital Management.

JOIN US FOR DR. BROADWAY SESSIONS

Did you know that DEAR EVAN HANSEN creators Benj Pasek and Justin Paul wrote songs as students at the University of Michigan and uploaded them to YouTube to spread their work across the world? Or that HAMILTON took Lin-Manuel Miranda seven years to create (after picking up Ron Chernow’s biography of Alexander Hamilton while on vacation)? Want even more behind-the-scenes info about Broadway shows?

Dr. Broadway (Kristin Stultz Pressley) is a Musical Theatre Historian – and one of Broadway’s biggest fans. A passionate and energetic presenter, Pressley has taught theatre at every level – from pre-school to university. She earned her graduate degrees from the University of Kentucky (Master of Arts in Theatre, 2005) and the University of Georgia (Doctor of Philosophy in Theatre, 2011) and subsequently taught Theatre courses at Presbyterian College (Clinton, SC) and Furman University (Greenville, SC).

Individual sessions will be hosted for each show, and all are FREE and open to the public. Join our newsletter list here to be notified of all Dr. Broadway sessions!

Winner of 6 Tony Awards® including Best Musical and the Grammy Award for Best Musical Theatre Album, DEAR EVAN HANSEN is the deeply personal and profoundly contemporary musical about life and the way we live it. The Washington Post calls DEAR EVAN HANSEN “one of the most remarkable shows in musical theater history.”

With lyrics and music by Tim Rice and Andrew Lloyd Webber, this musical theater classic is set against the backdrop of an extraordinary series of events during the final weeks in the life of Jesus Christ as seen through the eyes of Judas. Appealing to both theater audiences and concert music fans alike, this production pays tribute to the historic 1971 Billboard Album of the Year while creating a modern, theatrical world that is uniquely fresh and inspiring.

This laugh-out-loud love letter to the theater tells the story of Michael Dorsey, a talented but difficult actor who struggles to find work until one show-stopping act of desperation lands him the role of a lifetime. Featuring a hilarious Tony Award®-winning book by Robert Horn and an outrageously clever score by David Yazbek (The Band’s Visit, Dirty Rotten Scoundrels), TOOTSIE is a joyful delight.

This is the story of America then, told by America now. Featuring a score that blends hip-hop, jazz, R&B and Broadway, HAMILTON has taken the story of American founding father Alexander Hamilton and created a revolutionary moment in theatre—a musical that has had a profound impact on culture, politics, and education. HAMILTON is based on Ron Chernow’s acclaimed biography and completely transformed theater and the way we think about history.

Have questions about Hamilton? We can help. Click HERE to read Hamilton-specific FAQs.

Audiences and critics alike are rediscovering this beloved musical with breathtaking music, including one of the most treasured songs in musical theater – “Memory.” CATS tells the story of one magical night when an extraordinary tribe of cats gathers for its annual ball to rejoice and decide which cat will be reborn. The original score scenic and costume design are combined with all-new lighting and sound design and updated choreography and direction to make this new production for a new generation.

AIN'T TOO PROUD: THE LIFE AND TIMES OF THE TEMPTATIONS - July 18-23 (8 performances)

Featuring the Grammy® winning songs and Tony® winning moves, AIN’T TOO PROUD is the electrifying new musical that follows The Temptations’ extraordinary journey from the streets of Detroit to the Rock & Roll Hall of Fame. With their signature dance moves and unmistakable harmonies, they rose to the top of the charts creating an amazing 42 Top Ten Hits with 14 reaching number one and being voted the greatest R&B group of all time by Billboard Magazine in 2017. The rest is history — how they met, the groundbreaking heights they hit, and how personal and political conflicts threatened to tear the group apart as the United States fell into civil unrest. This thrilling story of brotherhood, family, loyalty, and betrayal is set to the beat of the group’s treasured hits, including “My Girl,” “Just My Imagination,” “Get Ready,” “Papa Was a Rolling Stone,” and so many more.