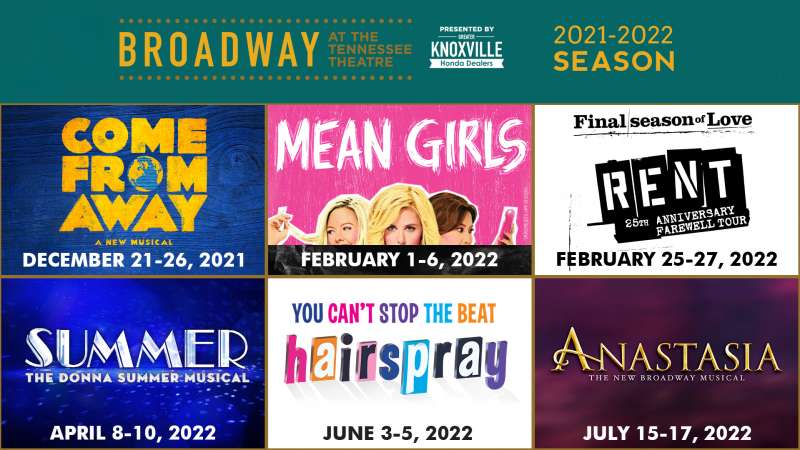 Since 2008, the Tennessee Theatre has presented classic favorites and recent hits in its Broadway at the Tennessee series, entertaining more than a quarter-million enthusiastic Broadway patrons. The 2021-2022 season of Broadway, featuring six shows and a total of 36 performances from December 2021 to July 2022, includes something for everyone.

RENEW A CURRENT SUBSCRIPTION for 6 shows

This New York Times Critics’ Pick takes you into the heart of the remarkable true story of 7,000 stranded passengers and the small town in Newfoundland that welcomed them. Cultures clashed and nerves ran high, but uneasiness turned into trust, music soared into the night, and gratitude grew into enduring friendships.

Direct from Broadway, MEAN GIRLS is the hilarious hit musical from book writer TINA FEY (“30 Rock), composer JEFF RICHMOND (“Unbreakable Kimmy Schmidt”), lyricist NELL BENJAMIN (Legally Blonde) and director CASEY NICHOLAW (The Book of Mormon). The story of a naïve newbie who falls prey to a trio of lionized frenemies, MEAN GIRLS “delivers with immense energy, a wicked sense of humor and joyful inside-jokery.” USA Today says, “We’ll let you in on a little secret, because we’re such good friends: GET YOUR TICKETS NOW!”

For a quarter of a century, RENT has inspired us to choose love over fear and to live without regret. This Tony Award and Pulitzer Prize-winning phenomenon has become more than a musical–it’s a cultural touchstone and a source of joy and strength for millions. RENT’s 25th Anniversary “Farewell Season of Love” is your FINAL CHANCE to experience this celebrated touring production–so don’t miss it!

She was a girl from Boston with a voice from heaven, who shot through the stars from gospel choir to dance floor diva. But what the world didn’t know was how Donna Summer risked it all to break through barriers, becoming the icon of an era and the inspiration for every music diva who followed.  With a score featuring more than 20 of Summer’s classic hits including “Love to Love You Baby,” “Bad Girls” and “Hot Stuff,” this electric experience is a moving tribute to the voice of a generation.

You Can’t Stop the Beat! HAIRSPRAY, Broadway’s Tony Award-winning musical comedy phenomenon that inspired the blockbuster film and live television event, is back on tour! Join 16-year-old Tracy Turnblad in 1960’s Baltimore as she sets out to dance her way onto TV’s most popular show. Can a girl with big dreams (and even bigger hair) change the world?

Inspired by the beloved films, ANASTASIA transports us from the twilight of the Russian Empire to the euphoria of Paris in the 1920s, as a brave young woman sets out to discover the mystery of her past. Pursued by a ruthless Soviet officer determined to silence her, Anya enlists the aid of a dashing conman and a lovable ex-aristocrat. Together, they embark on an epic adventure to help her find home, love, and family.