2018-2019 Broadway at the Tennessee Theatre Season

Since 2008, the Tennessee Theatre has presented classic favorites and recent hits in its Broadway at the Tennessee series, entertaining more than a quarter-million enthusiastic Broadway patrons. The 2018-2019 season of Broadway, featuring six shows and a total of 34 performances from December 2018 to June 2019, includes something for everyone.

Subscription packages for the season are on sale now! A new package offering Sunday matinee performances has been added this year. Four different package options are available with four, five, and six show options. Subscription benefits include reduced service fees compared to single ticket purchases, first notification of next year’s season, opportunity to purchase additional tickets to individual performances before the public, and free same-show ticket exchanges. To renew a current subscription or to purchase a new subscription, call the Tennessee Theatre box office at 865-684-1200, extension 2 or visit the box office in person on Clinch Avenue. The box office is open Monday-Friday from 10 a.m. until 5 p.m., and Saturday from 10 a.m. until 2 p.m.

Single Performance Tickets will go on sale on Monday, August 20th at 10am ET.

To view program books from this season, click here. 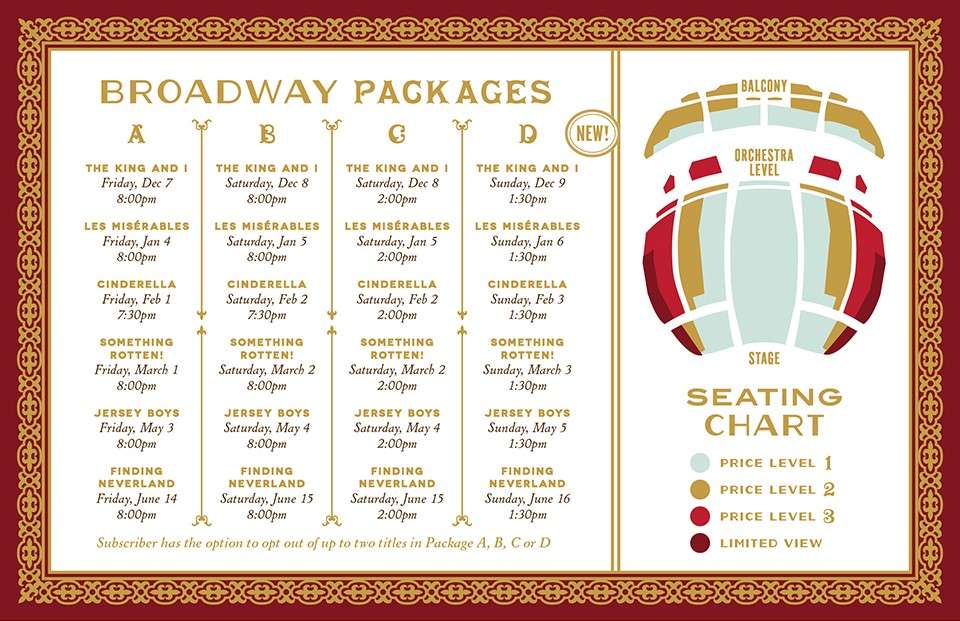 Two worlds collide in this “breathtaking and exquisite” (The New York Times) musical, based on the 2015 Tony Award®-winning Lincoln Center Theater production. One of Rodgers & Hammerstein’s finest works, THE KING AND I boasts a score that features such beloved classics as “Getting To Know You,” “I Whistle a Happy Tune,” “Hello Young Lovers,” “Shall We Dance” and “Something Wonderful.” Set in 1860’s Bangkok, the musical tells the story of the unconventional and tempestuous relationship that develops between the King of Siam and Anna Leonowens, a British schoolteacher whom the modernist King, in an imperialistic world, brings to Siam to teach his many wives and children. THE KING AND I is “too beautiful to miss” (New York Magazine).

Cameron Mackintosh presents the new production of Alain Boublil and Claude-Michel Schönberg’s Tony Award-winning musical phenomenon, LES MISÉRABLES, direct from its acclaimed Broadway return. Featuring the beloved songs “I Dreamed A Dream,” “On My Own,” “Stars," “Bring Him Home,” “One Day More,” and many more, this epic and uplifting story has become one of the most celebrated musicals in theatrical history. With its glorious new staging and dazzlingly reimagined scenery inspired by the paintings of Victor Hugo, this breathtaking new production has left both audiences and critics awestruck. “Les Miz is born again!” (NY1).

Rodgers + Hammerstein's Cinderella is the Tony Award®- winning Broadway musical from the creators of The King And I, The Sound of Music, and South Pacific that’s delighting audiences with its contemporary take on the classic tale. This lush production features an incredible orchestra, jaw-dropping transformations and all the moments you love—the pumpkin, the glass slipper, the masked ball and more— plus some surprising new twists! Be transported back to your childhood as you rediscover some of Rodgers + Hammerstein’s most beloved songs, including “In My Own Little Corner,” “Impossible/It’s Possible” and “Ten Minutes Ago,” in this hilarious and romantic Broadway experience for anyone who’s ever had a wish, a dream... or a really great pair of shoes.

Something Rotten! is “Broadway’s big, fat hit!” (New York Post). Set in 1595, this hilarious smash tells the story of Nick and Nigel Bottom, two brothers who are desperate to write a hit play. When a local soothsayer foretells that the future of theatre involves singing, dancing and acting at the same time, Nick and Nigel set out to write the world’s very first MUSICAL! With its heart on its ruffled sleeve and sequins in its soul, SOMETHING ROTTEN! is “The Producers + Spamalot + The Book of Mormon. Squared!” (New York Magazine).

They were just four guys from Jersey, until they sang their very first note. They had a sound nobody had ever heard... and the radio just couldn’t get enough of. But while their harmonies were perfect on stage, off stage it was a very different story—a story that has made them an international sensation all over again. Go behind the music and inside the story of Frankie Valli and The Four Seasons in the Tony Award®-winning true-life musical phenomenon, JERSEY BOYS. From the streets of New Jersey to the Rock and Roll Hall of Fame, this is the musical that’s just too good to be true.

The season closes in June with FINDING NEVERLAND. The incredible story behind one of the world’s most beloved characters: Peter Pan. Playwright J.M. Barrie struggles to find inspiration until he meets four young brothers and their beautiful widowed mother. Spellbound by the boys’ enchanting make-believe adventures, he sets out to write a play that will astound London theatergoers. With a little bit of pixie dust and a lot of faith, Barrie takes this monumental leap, leaving his old world behind for Neverland, where nothing is impossible and the wonder of childhood lasts forever.